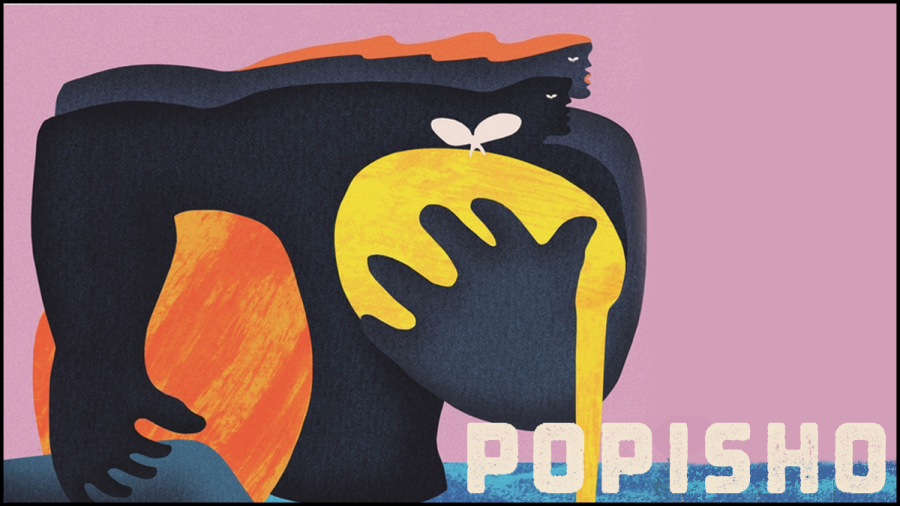 I attended my second Bocas Lit Fest back in April and was once again introduced to many Caribbean writers whose work I am excited about. One of these writers is Leone Ross, whose most recent novel, This One Sky Day (aka Popisho), was featured in the Imaginary Homelands panel. Before the hour was up, I was already sold on the book. The premise was intriguing; the readings promised me magic, humour, chaos, scandal, and the discussions made me believe that there was some deeper commentary behind the colourful prose and Ross’s quick wit. I did not know what it would be, but I was eager to find out.

I am not disappointed. It’s only July, but I can confidently declare This One Sky Day/Popisho as one of my favourite reads for 2021.

“Everyone in Popisho was born with a little something-something, boy, a little something extra. The local name was cors. Magic, but more than magic. A gift, nah? Yes. From the gods: a thing so inexpressibly your own.”

The best way that I can describe This One Sky Day is that it has the same energy as the phrase “Guyana’s nah a real place” but taken to its most literal and outrageous extremes. This book is not about Guyana, of course. It is set in a fictional archipelago called Popisho, which is heavily influenced by Jamaican and Francophone Caribbean cultures. The islands themselves are magical, and their inhabitants – people, plants, animals and even the dead – express this magic in the most bizarre ways. While magic is critical to the story, the book is more about overcoming personal and societal issues. Throughout the reading, I get the feeling that while the people of Popisho love to laugh at themselves and each other, they are using their laughter and wit to cope with deep-rooted frustrations with the society at large.

“Nothing going sweet you like that young Redchoose boy food, people said. Provided you could bear that look when he came into your kitchen, like he was cooking not for your apatite, but your failings.”

The book primarily follows two characters: Xavier Redchoose, the islands’ macaenus or celebrity master chef, and Anise Latibeaudearre, one of Popisho’s healers. Both characters are haunted by love and loss and are struggling to cope with their own public and private traumas.

The novel opens with Xavier hiding from the world as he is still mourning for his wife Nya, who passed away a year prior. He is deeply distressed because in Popisho, the dead usually return to visit the person they loved the most while they were alive. After months of waiting, he is afraid of leaving his house in case he misses her return.

Anise, on the other hand, has a problem that forces her outside. Her neighbour tells her that her husband, Tan-Tan, is having an affair – and a child – with someone else. Distressed and angry, Anise sets out on a journey to confront Tan-Tan and find this rumoured lover.

Some complications veer each of them off their chosen paths, however. Governor Intiasar’s daughter, Sonteine, is getting married, and the leader of Popisho seems intent on forcing Xavier to break his macaenus pact. In Popisho, it is the maceanus’s duty to cook one special meal for every adult resident of the islands. When Xavier ascended to his position, he told Intiasar that he only wanted one thing: a randomised list of citizens. His principle is clear: no one cuts in line. Everyone has an equal chance to be fed by the macaenus. However, Intiasar wants Xavier to make an exception for his daughter. He is expected do the traditional walkround and gather ingredients from across the islands to prepare a 7-course wedding feast for her and her husband.

Xavier finds himself in an odd position. Intiasar has never asked him for anything before. According to his brother Io, the Governor may only be doing so because elections are coming up, and he wants to put on an elaborate performance for Popisho. Xavier realises that if he rejects Intiasar’s offer, it may be interpreted as pettiness, especially as the government paid for his restaurant and his upkeep. To comply, however, would show a willingness to break his principles and cosy up with the Popisho elite. Either option would bring bad press.

Xavier caves. But, as he begins collecting his ingredients, he tries to think of a way to undermine Intiasar’s plans. He also notices that something might be wrong with Popisho, as the people look more distressed than he remembers. While he plots and fusses, he’s forced to confront several of his darkest secrets while also dealing with people’s reactions to his re-emergence. He also meets a young man named Romanza, one of the islands’ indigents or outcasts, who gives him an idea of how to solve his problems. Little does he know that Romanza has plans for him, too.

However, we see most of the wrongness of Popisho through Anise’s eyes, as her journey to find her husband forces her into one sticky situation after another. Through her misfortunes, we see origins of Popisho’s current predicament, and how the people and the land are responding to it. As Popisho reels, Xavier, Anise, Romanza and Sonteine are all forced to confront their own traumas and memories, and find catharsis and healing.

Mundane to Uncanny, Magic to Message

The aspect of this novel that captivated me the most was the richness of Ross’s prose, which she used to build the world around the characters in Popisho. While reading, I had the feeling of watching someone cornrowing words into a story. It was simultaneously linear and yet non-linear, like an embellished front-to-back style with criss-crosses and whorls, fractal partings and bejewelled accents. Each braid strand represents a theme, a character, a splash of magic, a complication. Even though the entire novel takes place in just 24 hours, literally one sky day, the story deviates from its linearity by using characters’ interactions and recollections to show the complex history of the people of Popisho and the islands themselves.

Popisho feels oddly familiar, like you could just walk outside today and find yourself listening to marketplace gossip or rolling your eyes at a tone-deaf DJ interrupting his music hour to howl tunelessly along with the songs, evoking the goddess Eheh at something surprising yet amusing. The frustrations of Popisho’s residents are also familiar, as is their method of protests and coping: witty heckling, painting buildings with political challenges, inventing scathing calypsos for DJs to bawl along to. Popisho truly is as Caribbean as its name.

Ross uses this familiarity to great effect as she introduces us to the surreal elements of Popisho, often turning the  mundane into something spectacular to show how characters struggle with public and private traumas. One running theme to this effect is the butterfly vs moth dichotomy.

“Butterflies were like alcohol. The head of good wine in a burnt orange butterfly. The cool swallow of a rare ship-bought vodka in clear, white and blue beauties, the kind that skimmed the waves until you didn’t know where water began and insect ended. It took practice to pluck them from the sky and eat them alive. If you didn’t know how, you found yourself coughing dust, a puzzled creature beating its wings in your throat, scales sticking to your teeth. But when you developed the knack, butterfly warmed the stomach and spun the room…
Not like deep-cured moth, from indigent hands.
Most normal moths were safe, if bland, nobody bothered with them. The danger was in the bigger ones: eight or ten inches across, elaborate, hung for weeks, flaking and dark, bred in the Dead Islands. That kind of moth killed you over time, like revenge.
But before you died, you were sanctified.
So said the moth eaters.”

Throughout the novel, characters eat butterflies as a part of their socialisation and entertainment. It is commonplace and no one really cares about butterfly use, even if someone eats too many, or eats them the wrong way. Anise’s neighbour, for example, loves to hunt for sleeping butterflies and eat them before breakfast.

Conversely, people have a vastly different reaction to moth eaters, but the reaction varies according to a person’s station. Ross herself notes in one of her promotional interviews that butterflies are to alcohol as moths are to heroin, and the people of Popisho discriminate accordingly.

There are so many other instances where she uses ordinary things to point out inequality and unfairness throughout Popisho, e.g. sex worker exploitation, the emotional and mental traumas of miscarriages, discrimination against same-sex couples, and the sweeping ramifications of governmental corruption. She presents each of these issues with a bit of accompanying magic from either the people of Popisho or from the land itself, showing how far-reaching and destructive these issues can be.

Most of all, while their cors may be able to help them somewhat, the problems the characters face cannot be solved with magic alone. There is no subtext cors to prevent miscommunication. There is no magic to prevent discrimination, bullying, murder or infidelity. Each person must figure out how to deal with their own problems, and they often have to tap into their communities to do so.

While the novel is fantastical, the character’s struggles and problem-solving ground it in reality, and make the reading experience rich: amusing at times and heartbreaking at others.

I love This One Sky Day, and I know that this will be one of the books that I will find myself constantly returning to. I want to re-immerse myself into the language and the world, partly because was a pleasurable reading experience, but also because I know that the more I learn about the wider Caribbean, the more I will be able to understand the novel and pick up references that I may have missed. The novel is just that dense and layered and beautiful.

I would recommend this book for anyone who loves magical realism and wants to read more Caribbean books. Ross’ wit, humour, empathy, and love for the Region shines throughout This One Sky Day, making it a fun but contemplative read.

Want to learn more about This One Sky Day/Popisho? Watch Leone Ross in conversations with Marlon James and Maisy Card.

Want to read more Caribbean Books? Here are my recommendations: